It was almost 2 months before I actually moved into 407. And when I bought the house, we only thought it needed a really good, deep cleaning and maybe work on making it prettier. LOL. After getting the popcorn ceilings scraped, the ceilings had to be painted. All the old flooring came up and couldn’t be worked on until after the ceilings were painted. The bedrooms couldn’t be carpeted until the tile that came up to the doorways was complete (so the carpet could be tacked down at the edge). I went ahead and had my POD delivered right away, so that I could unload it into the garage. All of this work began without the cooler hooked up because my dad said he wouldn’t start up a 40 year old cooler and I was running fans in the room I was working in. Thankfully, May and early June don’t get the hottest temps, but it wasn’t fun. Finally, after a post on Facebook about how awful Lowe’s was in trying to get a new cooler, an old friend contacted me that she had a guy (a plumber). They were there that evening. He got the old cooler running and an estimate on a master cool for me. He had the new cooler hooked up within a week. What a lifesaver that was. I don’t know how I didn’t lose 20 pounds that summer. Especially since I took a week of vacation in June, otherwise I am going to work at 5am and then going to work on my house for 3 hours after. It was very rare, after my vacation, that my parents and I are working at the same time.

I had read a lot of information on scraping the popcorn ceilings, and saw the warnings about asbestos. I also am aware that asbestos was circa 1960s. So I think we were okay. I did however, make sure whoever was scraping was always wearing a face mask and goggles. I had bought a bug sprayer and this scraping tool specifically for scraping popcorn ceilings.

You attach a little bag on it that catches the mess. It worked better without the bag but we also found that a big plastic scraper worked best. When you fill the bug sprayer with water, make sure it is warm because it soaks in better. And when you are spraying the ceiling, only do small patches at a time. Spray and then scrape. Remember, I had left the old carpet down to just roll this mess up into so I didn’t put any plastic down anywhere. After getting all the ceilings scraped (luckily the bathrooms, kitchen and den weren’t popcorned), we then cut, pulled and rolled up all the carpet. And then the padding. Even though most of the mess went out in the carpet, it still took vacuuming, sweeping and vacuuming again to get all the dust cleaned up. I think I might have even used a blower to get it off the ceilings and walls between vacuuming. And more sweeping. We didn’t do anything else in ways of patching before painting the ceilings.

My mom and I started in the master bedroom with the painting and her Graco paint sprayer. Luckily, in this process, the bedrooms didn’t have ceiling lights in the way. They each have two vents, but those were removed to be out of the way and to be painted themselves. We had put on these painters footies over our shoes, had bandanas on our heads, goggles and a face mask. The ceiling didn’t paint well with the sprayer. It was wasting a lot of paint and seemed to all just be coming back down more than sticking. I was covered from paint sprinkles. Every inch of bare skin. My eyebrows, even my contacts where paint got past the goggles. My mom gave up and I went on to use the sprayer to paint all the cleaned and caulked closets to get rid of the blue tinge (they looked so much cleaner after that). The rest of the ceilings were painted with an extended paint roller by me or my dad. Every inch of ceiling was painted, except I haven’t done the kitchen area yet. When I did the closets, I stepped inside and even got the part above the door. 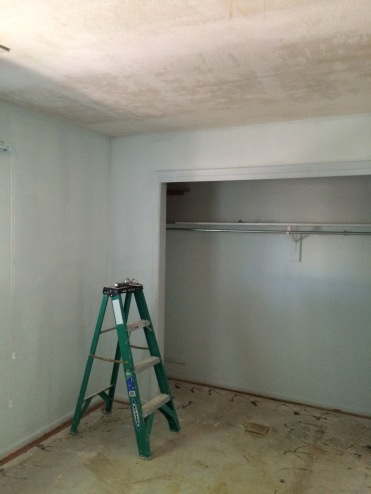 The paint used for the ceilings is Behr Premium Plus in Solid Opal. I used gloss in the bathrooms and flat everywhere else (it took about 8 gallons). I also used Solid Opal on the baseboards, trim and doors but used semi gloss for those.

At this point we pretty much have a house of empty rooms. Carpet has been pulled everywhere but the den. The ceilings are scraped and painted throughout the bedrooms and hallway. Every inch of linoleum has been scraped up (it was in the laundry closet, by the front door and under the carpet in the kitchen). The doors have been removed and some are lined up in the living room. The toilet and vanity have been removed from the hall bathroom in preparation to tile there first. The bathrooms had had tile baseboards, so these have also been removed. And the walls patched. The wallpaper is coming down so I can paint in there before the tile. The tub has this nasty tar like stuff on it where they had attached a strip to keep the carpet down. I used GooGone and scrubbed and scrubbed to get that all off. I might have used several other chemicals too. But the steamer did nothing. Luckily it is a porcelain tub and I was able to also use a scraper. By day 12, all that was left to do in this bathroom for tiling was to clean off this tar and paint.

At this time, I still had wanted to tile the whole house so we had removed all the tacks from the bedrooms from the old carpet. Either by cutting the nails off (only in one room) or by pulling them out with a hammer. Since they had carpeted everywhere, there were a lot of nails to be pulled out. And sometimes cement came with them. When my son talked me into carpeting the bedrooms, Home Depot was going to charge like $100 a bedroom to fix and retack. The sales lady was kind enough to inform me to fix the holes myself with this self leveling cementy stuff. As soon as I find it, I will tell you what it was. It was feathery, and really easy to smooth out with just a plastic scraper. For some reason, we left the existing baseboards in the bedroom (I painted them) but replaced everywhere else. It doesn’t really matter since the carpet goes all the way up to them. Maybe I will make them “bigger” some day. I pretty much smoothed this cement all around the outside of the baseboards in all 3 bedrooms. The carpet was installed on Day 39. 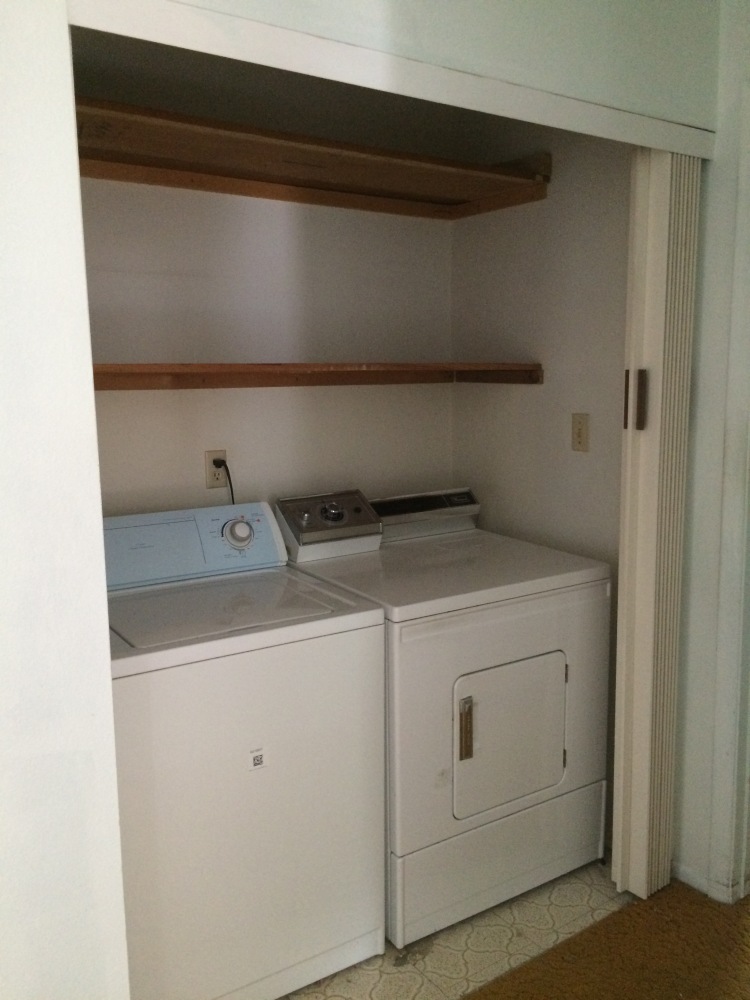 This entire closet was also cleared out. I sold the washer and dryer because I had my own. I removed the shelves, and the accordion door. Scraped up the linoleum, patched holes, caulked, taped the light, painted the ceiling and then the walls. At that time, my brother was working for a cabinet company and brought me home two uppers and two lowers. He installed the two uppers in this closet and I couldn’t be more happy with the look. That outlet and that light switch are the only ones in the whole house that weren’t replaced. A job my dad and I started out to do on our own but ran into a snag after the master bedroom was done and had to call an electrician. Which worked out great actually because he also hid wires from where we tore down a wall in the kitchen and installed light boxes from the attic (or for fans) in the bedrooms and the living room. And all for under $1000.

During this time, I had also decided anything that needed to be taken to the dump needed to be done. In hindsight, I should have had a dumpster delivered, but who knew. The bagster just didn’t cut it. There was a closet, useless, in the den. Tore it down, it was only particle board. 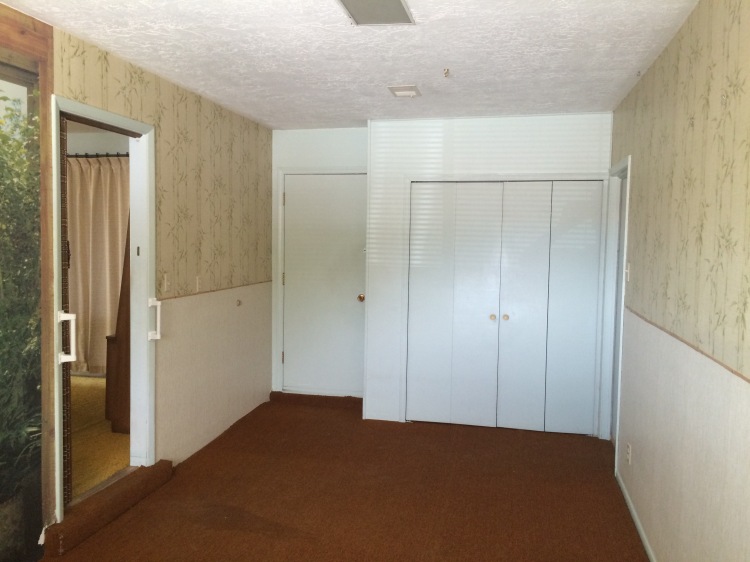 All hinges and door knobs were removed and replaced. The door to the garage was replaced with an exterior door, with a swinging hinge to self shut. And the front door (it was falling apart) was replaced. All light fixtures were removed, as well as drapery and its hardware. Any of these that didn’t sale in the garage sale were donated. All the blinds were thrown away, they were nasty. I’m telling you, the 70s had to go.

One thought on “Renovating 407: Part II”