I have to laugh at that title. Really. I had put The Best of 2015. But after I wrote about February, I had to change the title.

As my word of the year for 2015 was Renew, I have to say it is the first year I really lived up to my word. But I haven’t been very good about taking pictures this year. This post will be loaded with photos, but not of favorite photos. I think next year, I need to get back into doing the Scavenger Hunt Sunday with Ashley Sisk and get more pictures taken. I also started to do her Memories, Dreams and Reflections for 2015 but I just don’t have that many pictures to use. Maybe it’s not to late to join in with her party.

The beginning of the year started off like no other. It seemed to be unseasonably warm. We hadn’t had much moisture at all. When the soccer team went to the adventure park in early February, it was just hoodie weather.

The end of February was the worst time in our family’s life. My son called me at work on a Thursday to tell me my dad had fallen on his bike. He was at the hospital with my mom. I didn’t learn that he had had a heart attack for another hour. We were leaving that hospital for another one when my brother had told me in the parking lot that he had flat lined several times already. Thursday evening it had started to snow. By Friday, most of my dad’s family had arrived. It took me 3 hours to get my mom to the other side of Albuquerque Friday morning because of the snow and ice and traffic because of it (a trip that should have been only 45 minutes with traffic). She had gone home to sleep in her bed since my dad had been put in a medically induced coma to try and save his brain function. Friday evening it had taken my son’s soccer coach 5 hours to get me home because it had been snowing all day. New Mexicans don’t know how to drive in the snow. Which is weird because anyone my age or older should be used to it because it used to snow more when we were growing up. I learned to drive in worse snow up in Northern NM.

Friday night, my dad woke up out of the coma on his own. To this day he doesn’t remember anything except the beginning of his bike ride, and nothing about any of the time in the hospital. He was quite hilarious when he wasn’t remembering any of this though. He had us all laughing in the hospital. (He hated the food, or that they made him eat it.) He also had his 64th birthday while in the hospital. The food department brought him a cupcake and sang Happy Birthday. It was really nice. 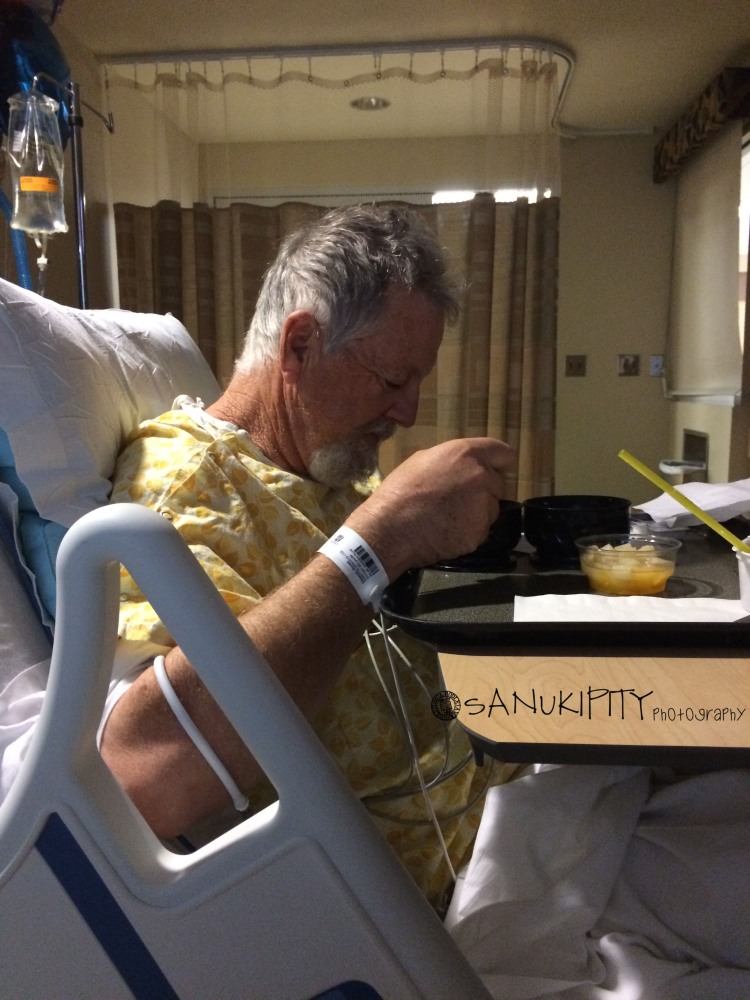 Through a turn of events, mostly when my parents did a Pay it Forward with a news channel to the Lifeguards that ultimately saved my dad’s life, we learned the whole story, starting with when and where my dad collapsed. A doctor, a father from a soccer team that plays my niece’s team, was who drove by and saw my dad collapse, called 911 and started CPR. A lady (whom my mom recently ran into and sort of already knew from Zumba or church) leaving the swimming pool saw my dad collapse and went back into the pool and retrieved the Lifeguards who ran to help with a defibrillator. My dad was treated and actually admitted into the hospital as a John Doe because it was only because of the Fire Chief that decided to go along for the ride with the medics that his wallet and phone were found in a back pocket of one of the shirts already cut off of him (he was a rider himself and thought to check for the pocket). I can’t take credit for the next picture, but it is of my dad and the fire men that responded to the 911 call. Men that will always be in our thoughts and prayers. 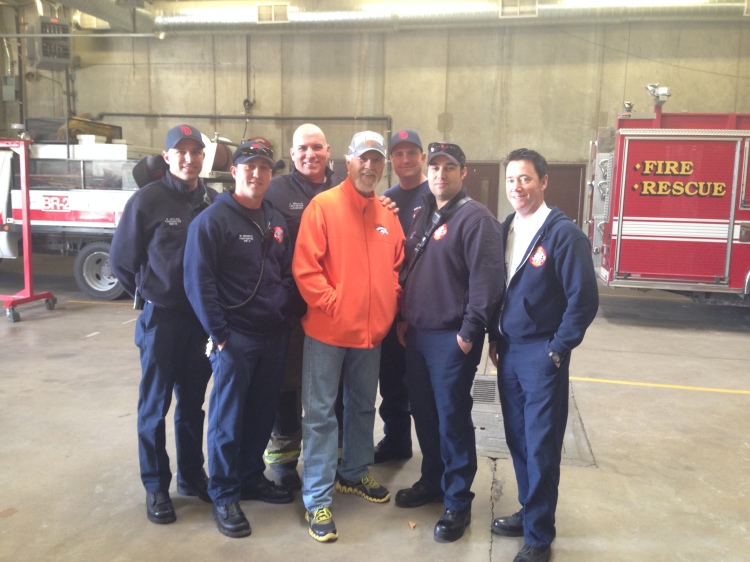 This is one of my favorite scrapbook pages of the year. 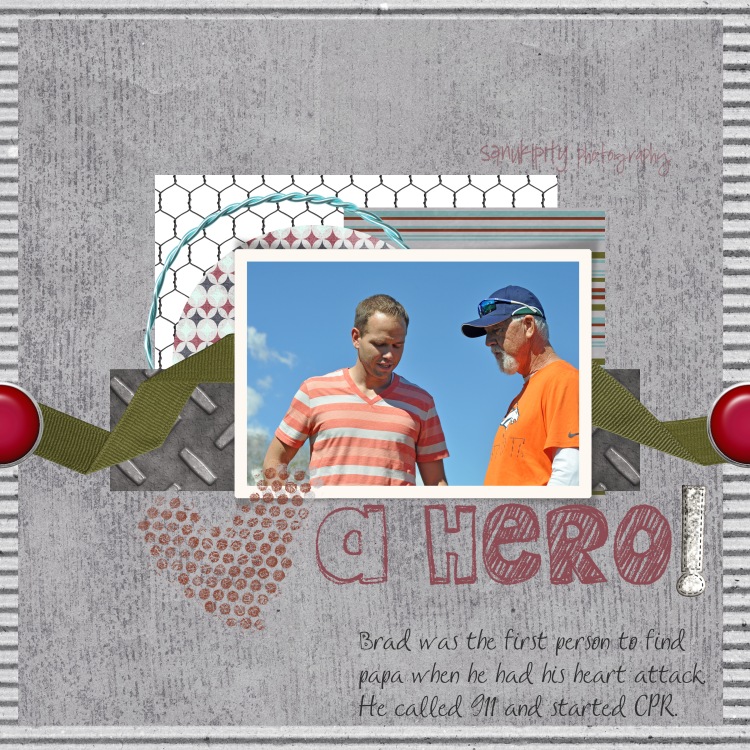 My dad has made a full recovery. He has a stint in his heart and will be on meds the rest of his life, but he also has a kidney gone wrong so some of the meds are for that.

In May, I finally found a house. I went with a full-time Realtor and it took us only a month (after all the headache and time my brother’s Realtor friend and I went through). It was a little out of my price range considering what work needed to be done, but it has been well worth it. And I can’t even tell there is an elementary school across the street except when they have events and cars are everywhere. But noise is not a problem. I went with this house, more so than any other I had seen in this price range, because it had a brand new roof (and the backyard was fully landscaped). Costs that I really didn’t have the funds for. I kept track of our (mine and my parents) renovating on Facebook and I haven’t shared room by room on here yet because we aren’t finished. But here are some before and after side by sides. (Have you ever loaded iPhone pictures that look great on the phone and on the computer but when you upload them into Photoshop Elements they look terrible? The quality here is bad, sorry.) 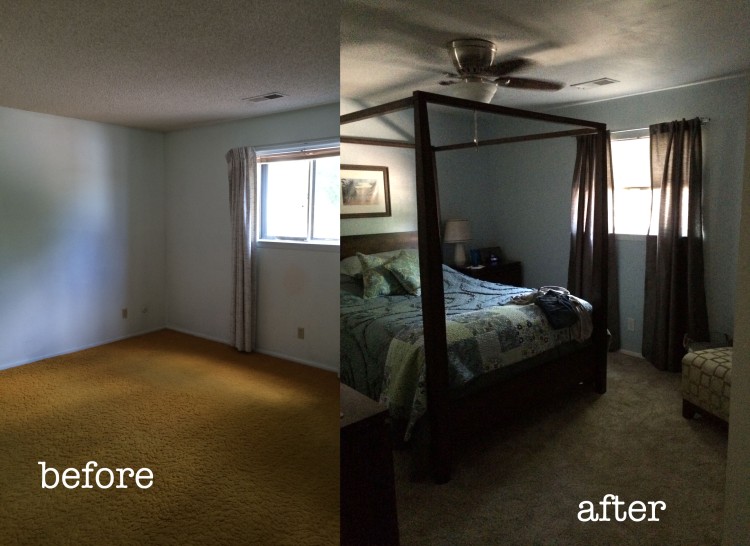 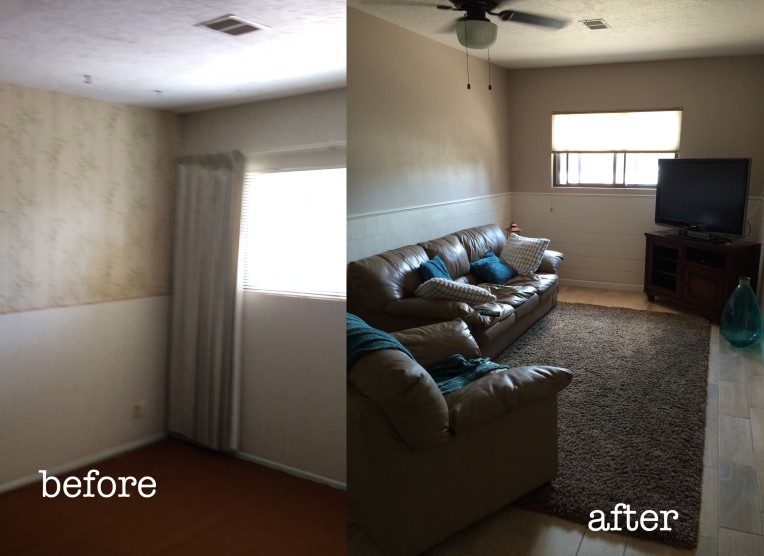 None of these spaces look the same now. Everything has been a work in progress. The house was built in 1974. I think the carpet was original to the house. It was pretty clean considering how old it was, but it was full of sand underneath. They had also added rec room carpet over the linoleum in the kitchen and bathrooms. The den, kitchen and bathrooms all had wallpaper. And not the same one in any of them, three different papers in the den (a finished garage) and two layers of paper in the kitchen. The one in the master bath had a fabric backing so that took a lot of plaster off the wall with it. And there were several termite damaged spots underneath the papers. The ceilings were popcorn in the bedrooms, hallway and living room. Its all gone. Every vent and door were repainted. Every door knob and hinge were replaced. The baseboards stayed in the bedrooms (repainted) but all the rest were replaced (there had been some termite damage). Every light switch and electric outlet were replaced (most of which were done by an electrician because there was a faulty wiring somewhere shorting some out). The electrician also installed fan outlets in the bedrooms and the living room for us to put in fans. Almost every light has been replaced, no need to touch the ones in the closets. EVERY inch of wall has been repainted and almost all of the ceilings (except where I haven’t finished in the kitchen and the master bath shower area). Every inch of flooring was also replaced (except in the hot water heater closet). See that awesome wood floor looking tile? My parents did all that. Every where except the bedrooms. **I also want to mention, bringing up termite damage, that yes New Mexico has termites. I was told they are a slow, lazy termite though so they usually don’t get past the drywall, so don’t get into the wood. However, once you have them, you need to have the treatment done every 10 years or so. I think this is what the previous (only other) owners didn’t do. So termite treatment was done by the sellers as an agreement in the purchase.

All this work was being done while I was working my full time job as well. So after about 4 months, I petered out. My following post will be about my word of the year and plans for 2016.

Around about the time we were getting going on all this work, my brother went to work for a cabinet installation company. They do a lot of DR Horton houses. Did you know that when cabinets get rejected by the home owner, because of a scratch or dent or a small imperfection, they just get tossed into the trash? More like someone takes them home, but sometimes trashed. So my brother was able to get me enough for my laundry room and a kitchen island. He is in the process of finding me enough for the rest of my kitchen, which isn’t a lot of cabinets actually. Even if he can find a full set that I don’t have to pay full price for. I’m not too very picky about the color. I told him we can always paint them if need be.

Late summer my parents got a new dishwasher, fridge and microwave and gave me their old ones. I removed the old oven vent, that didn’t even work, and my parents installed the microwave. The great thing about posting our daily progress on Facebook, a college friend of mine was reading when I posted my frustration with Lowe’s over trying to get an estimate for a master cool. She brought over her plumber friend and he has been my plumber friend ever since. He has done a lot for me that we weren’t able to fix and has even done some work for my parents too. And he was very low priced and will remain that way for us even though he has since become a licensed contractor and can charge more. He even is a welder too and pretty much can do anything. (Ironically, he is an ex boyfriend of my cousin and my aunt had once thought he was the one that would become her son in law, but we didn’t know any of this in the beginning). Hopefully next year I will be able to afford that new furnace and Adam to the rescue.

In October a pantry was born (it still doesn’t have doors because it took me forever to figure out what color I wanted to do it). And the kitchen island has been functionally installed. It still needs to be finished. The holidays (and my three week flu) put a stop to any work around here. In the mean time, I had also started working on the backyard. I chopped down and dug up 4 big cacti and just have to get what I can into the trash each week and my dad and his buddy chopped down the really big tree that was too close to the house. It still needs to be completely gotten rid of. I have plans for some of that wood though. Once I get that cactus removed and we get a new fence up on one side of the yard, I can get my son a dog. He sure has been hounding me (haha). Snow, rain, snow, rain and wind have kept me from wanting to work back there the last month or so. Yucky stuff. I don’t think it will really get dry back there until March, so it might be awhile.