LOL. I am hilarious. I saw where all these people had their posts written beforehand and ready to post on that day. I don’t know if I was the only one that waited to write the post the day of, but to me that is what Write 31 Days meant. Yet, I got behind the last 2 days due to very business around here. I don’t think I will post every day like before, but I will try harder to write a little more in my posts when I do.

What a weekend already. I posted yesterday about the cake I made for the Halloween party. A party that included 10 soccer boys. A baby. And some parents that stayed. My brother’s family came this way trick or treating and stopped to eat dinner. There was so much food left over. Pot lucks are the way to go. I have always wanted to have a Halloween party and decorate, we didn’t go all out but it was fun. Then a few of us took the boys trick or treating around the neighborhood. Mr B was a hot mess. I couldn’t get him to slow down for anything. The coach’s son was Godzilla. A little blow up, full piece costume. He’s a small 10 year old and it was hilarious when he would start to run across the street, his long tail trailing behind. It didn’t stay on long. 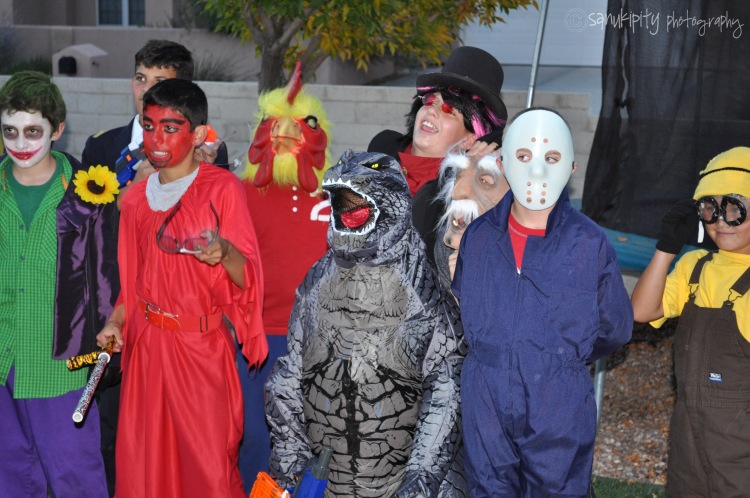 Mr B is very uncreative and I have decided not to buy him store made costumes any more. The price for one wearing it once is crazy. I so wanted him to be a Box Troll, but he wanted to be an assassin. I tried to make him look like Arrow but it didn’t turn out that way. After heavy dart blowing play, he ended up in just jeans and his sweatshirt that zips over the face. Sheesh. I thought the minion was the cutest. 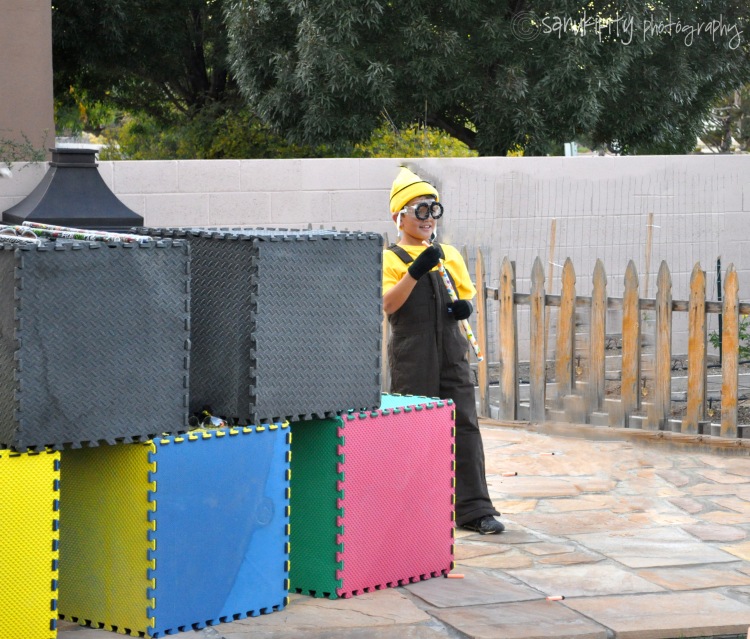 A few years ago, my parents ran into this man at the park that made blow dart shooters for his grandkids. He let Mr B take one. It’s just PVC pipe, cut a certain length and the size to fit Nerf bullets (pea shooters). Then you cover the pipe with Duct tape. We had the kids all make their own for Mr B’s birthday last year and then they played with them. They had the most fun. But I have never seen any of the kids have as much fun with them as the 10 boys did on Friday. Papa made up these cubes with the mats they put under the pool and they were set up on both sides of the yard. Talk about cheap, easy fun. You can create games with them too. Like shooting at targets.

After staying up later than usual on Friday, with all that fun, I then had a full day planned yesterday. Of course I am still up before 6, but since no one else is, I play around on the computer until everyone else is awake. It was 11 before I got going, oops. I made another cake for my nephew’s birthday, went to my son’s first indoor soccer game (it was a different experience for them), frosted the cake and went to my nephew’s birthday party. I am a tired chicken today.

My nephew wanted an elaborate cake. I didn’t have that kind of time. So he got a ninja-ish cake instead. All he really needed for the success of his party was his obstacle course anyway (think American Ninja Warrior). My brother built him this 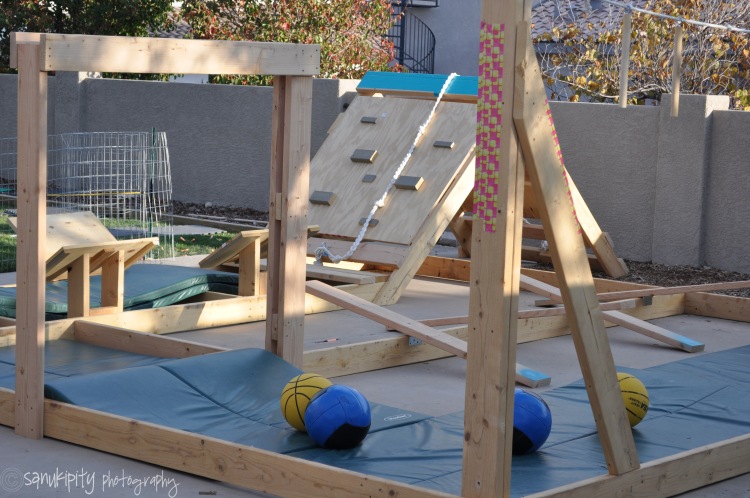 Luckily both mom and aunt are coaches so they brought home the mats and the balls. The course is for sale. My brother even will help take apart and go help put it back together.

Here’s the rundown on yesterday’s cake. 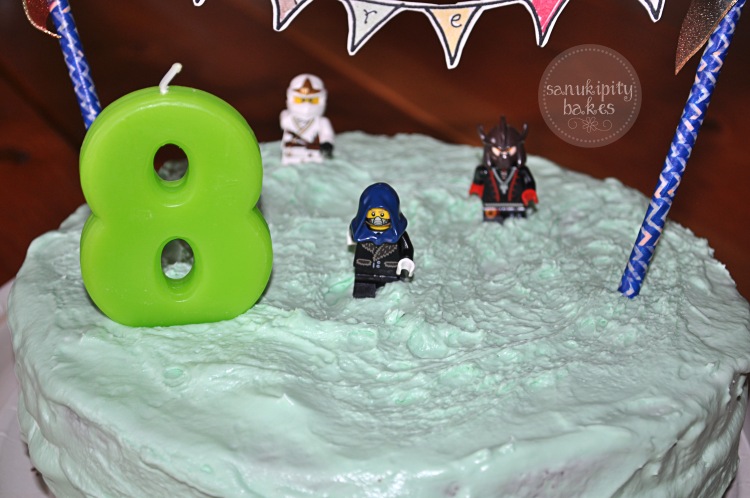 Ingredients for cakes: (makes one round cake)

I made two batches, separately. Recipe from Cooking Classy.

1. Preheat oven to 350 degrees.
2. Grease two round cake pans. (I used Pam and it worked great. Last week when I tried out a half batch, I used Crisco and flour and it stuck in the pan.)
3. In a mixing bowl whisk together flour, baking powder and salt, set aside.
4. In a separate, bigger mixing bowl, whisk together granulated sugar, light-brown sugar and cocoa powder. Pour in melted butter and use a wood spoon to stir until combine.
5. (I just kept using the wooden spoon) Mix in eggs and vanilla extract.
6. Stir in milk.
7. Slowly add dry ingredients and stir until just combined (batter will be thick).
8. Pour batter into one cake pan.
9. Repeat with second batch.
10. Bake in preheated oven for 30 minutes. I baked them on the top rack for 15, then the bottom rack for 15. Then I left them in the turned off oven for a few more minutes. Toothpick came out a little wet, but they set when they cooled. When I cooked them until toothpick was clean, they ended up too done.
11. Allow to cool in pans for about 45 minutes and then transfer onto a wire rack to cool. (With the Pam, nothing stayed behind in the pans.) 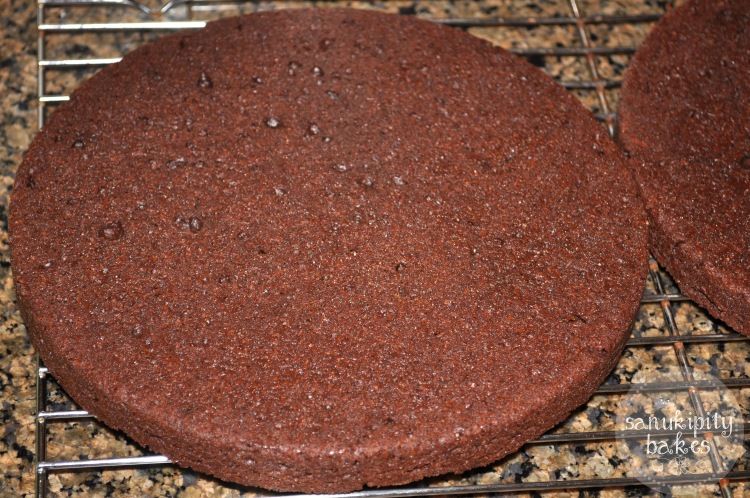 For the marshmallow buttercream:

I made up a batch and a half of Cookies and Cups (but I don’t use as much powdered sugar and I don’t sift it) buttercream on Friday and saved part of it in the fridge. I had also made up marshmallow fluff last month and saved it in the freezer. So I just left the two out to get room temp before I mixed together until I got the flavor I wanted. More marshmallowy than buttery. I then put in some green food coloring.

I don’t have a pretty cake platter or stand so we just used a Tupperware, upside down, with some paper plates for height. I think I need to make a stand now. So I put one cake, bottom side up, and slathered it with the plain marshmallow fluff. 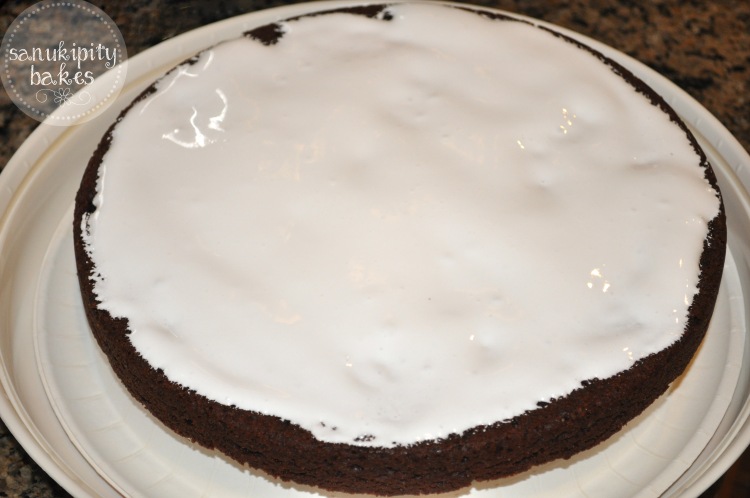 Then I put the second cake on top of that, also bottom side up (it made for a smoother surface). 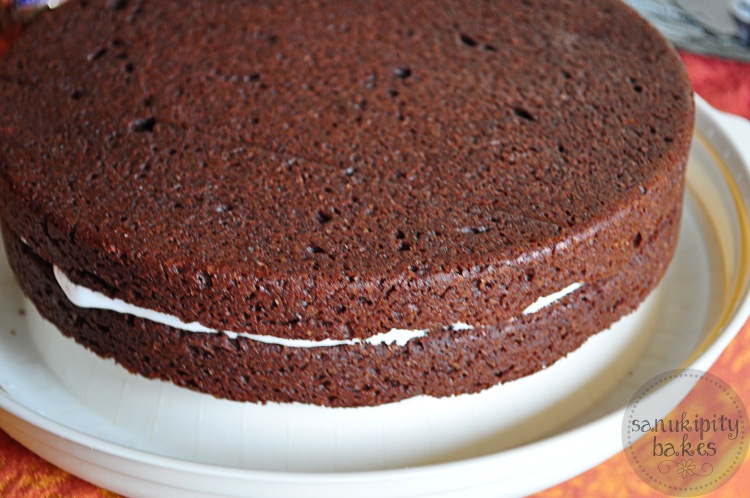 After wiping away the marshmallow fluff that was coming out the side, I plopped on the green Marshmallow Buttercream and smoothed it all over the top and sides. I then roughed up the top a little before I added the decorations. I had my nephew make me some Lego people so he would be happier about not getting the elaborateness he wanted. I ran those under really hot water to sanitize them. 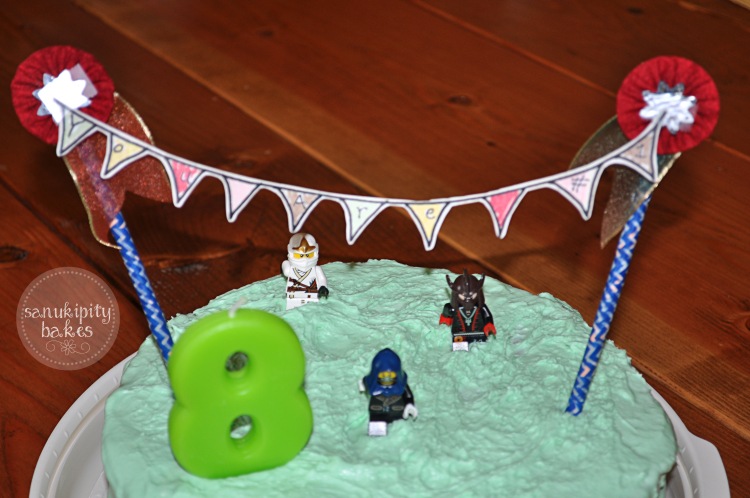 I used straws to make the “poles” but didn’t like the colors so I covered them in Washi tape (I love that stuff). I couldn’t figure out how I was going to do the medallions, but suddenly thought that Yo-Yos would be perfect. The only ones I had made up already that weren’t girly were these red ones. But that worked. I glued on the “stars” and then cut and glued the ribbon to the back, then covered that up with a star-burst sticker. I printed out the bunting flags after adding You Are #1 in PSE. I wasn’t sure how to make that work until I had the poles in the cake so I had to tape them. Mr B positioned the Legos for me, and I think my nephew liked it. He was pretty hyped up by then. It was a popular cake, everyone that ate some, which was almost everyone, said it was really good. This one is a keeper. It was rich, but with the marshmallow flavoring, it wasn’t overpowering.

After all of this, I realized I haven’t posted my 64 Shades of Color: Blue Violet, so that will have to come later today with my Scavenger Hunt Sunday post. I also started my Gratitude November project yesterday. I already am loving this random acts of kindness thing. I will be posting all of that as I go on Instagram. My button is in my sidebar.

2 thoughts on “Day 31: The Final Frontier and a Ninja Cake”