First of all, a BIG shout out to Shelly at Cookies and Cups for sharing the most awesome recipes.

My son turned 10. That’s a big birthday for a kid. It’s taken me two weeks to get it posted because last weekend was my nieces birthday. I volunteered for snacks for his soccer game Saturday. Made sacks for each boy and was going to take enough mini cupcakes for 2 each and extra. We had his birthday party at my parents’ house Sunday. I was going to make mini cupcakes for that and his beloved Monkey Bread, but in muffin cups instead of a bundt pan. My plan was to make 2 batches of cupcakes on Friday. One vanilla and one milk chocolate and make a pan of marble with those two. Frost what I needed Saturday in the morning and make the other batch of cupcakes, and frost Sunday’s on Sunday. The milk chocolate ones came out great. I knew they would because I tried out the recipe the weekend before. I used Cookies and Cups recipe. Very tasty. My vanilla cupcakes were a little fail. Tasted good. But I forgot 2 key ingredients. They are still edible so I put them in the freezer to frost for the soccer game treats (game was cancelled due to all the rain we’ve been getting, so I hope I get treats later). I tried another favorite vanilla cupcake recipe with a much smaller batch. They were really good but an epic fail. They didn’t rise. They sank. They didn’t come out of the tins. Soooo. I saved them. Saturday morning I crumbled them up, along with the bigger fail ones. Then I added the Cookies and Cream buttercream frosting I made before (I used Cookies and Cups buttercream recipe and added chopped up WhoNus). Mushed it all up and made cake balls.

I am learning I need lots of practice in the kitchen. I can’t wait til I have my own again. I surely want a Kitchenaid. Mixing with a hand mixer is very hard to do while adding ingredients. But doable.

I made the first batch of vanilla again. Made sure I made it right this time. Yummy. What a difference a small ingredient can make. Yes, this blonde has blonde moments. Even if I hate to admit it. But Shelly’s kids had a great idea with the MnM frosting. It was amazing. I also made up her buttercream and split it into 3. I then made one Cookies and Cream, one Biscoff and one with Andies candies. The Andies was my favorite. It was divine. I will do that one again. 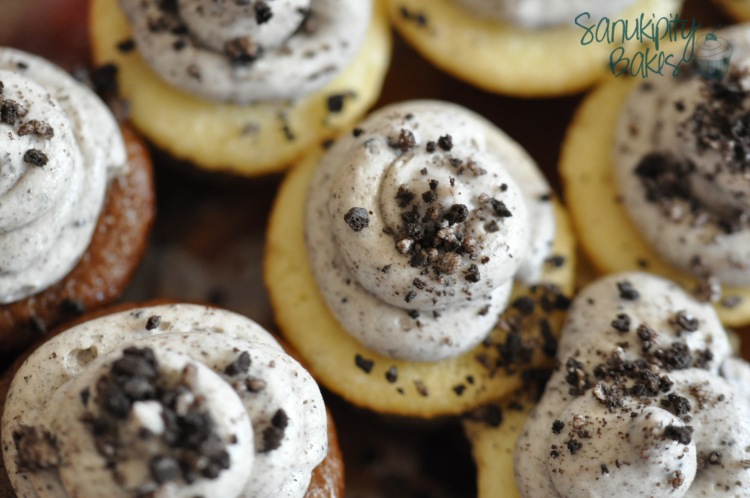